Registrations open for seminar on the 60 years of Brazil-Republic of Korea relations: education, innovation, and our future 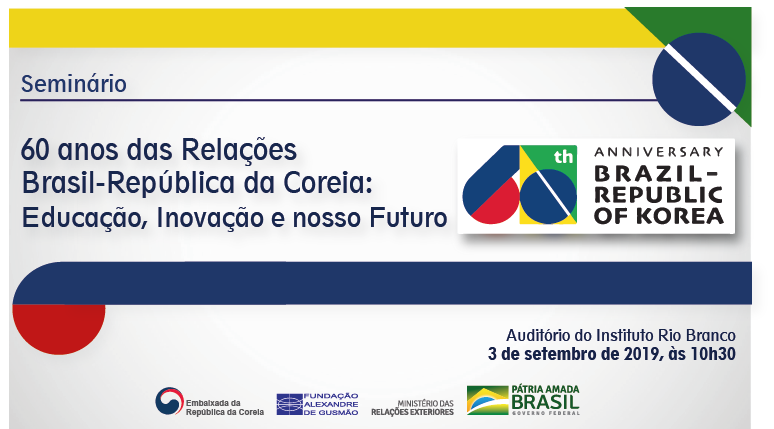 The Alexandre de Gusmão Foundation (FUNAG) has opened registrations for the seminar “60 years of Brazil-Republic of Korea relations: education, innovation, and our future”, an initiative of the Brazilian Ministry of Foreign Affairs and the Embassy of the Republic of Korea in Brazil, with FUNAG’s support. The event will take place at the Rio Branco Institute’s auditorium, at 10h30 am on September 3, and will feature the participation of the Minister of State for Foreign Affairs, Ambassador Ernesto Araújo.

The seminar will consist of expert presentations discussing the relation between the countries in the following panels: “Korea-Brazil cooperation in emerging industries”, “Korea’s education” and “Korea’s economic development history”.

As well as the Brazilian Minister for Foreign Affairs, the event will feature participation from the Ambassador of the Republic of Korea, Kim Chan-woo, and the MRE’s Secretary for Bilateral Negotiations in Asia, Pacific and Russia, Ambassador Reinaldo José de Almeida Salgado, among other officials and experts.